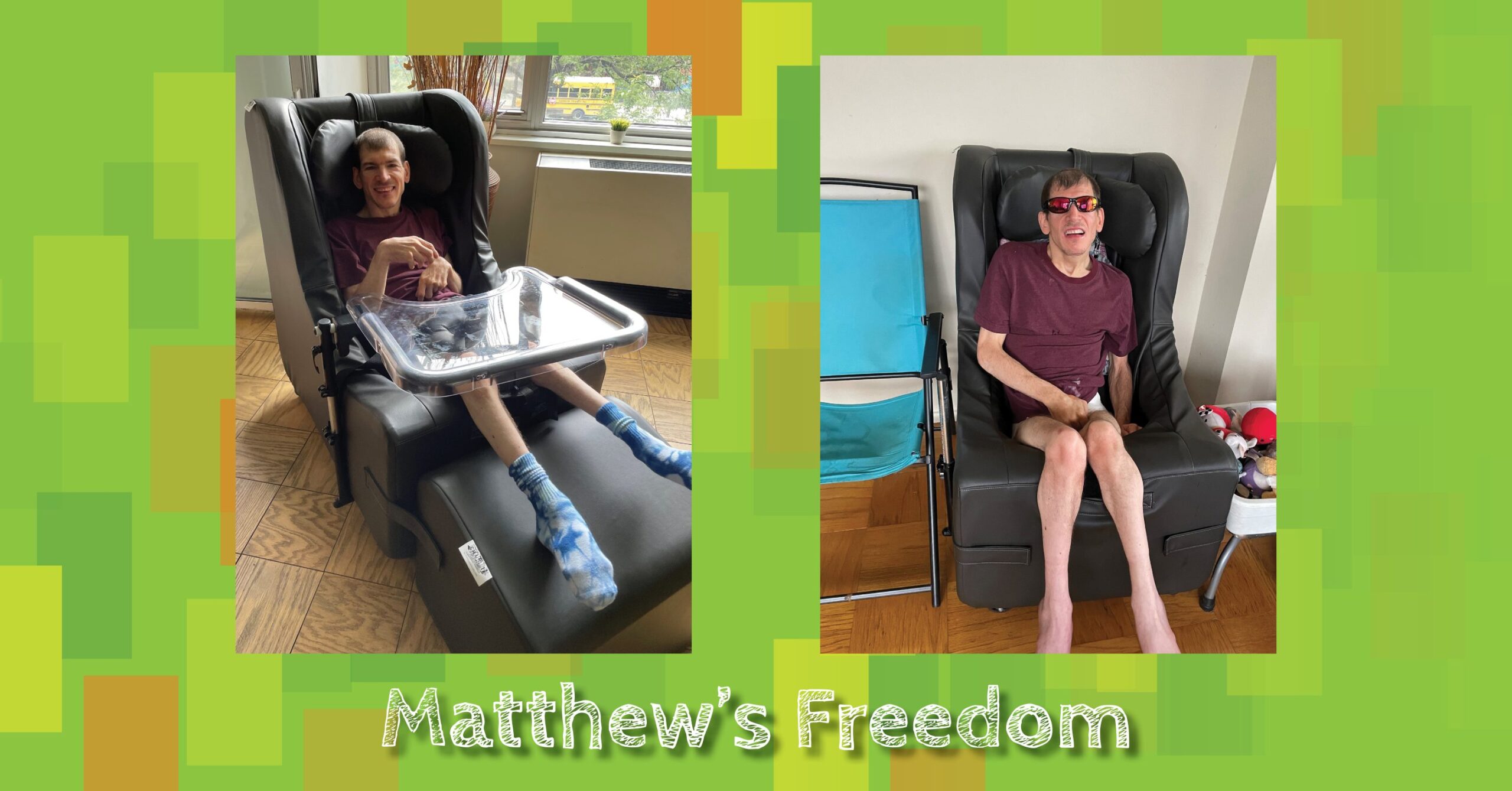 When COVID-19 hit Manhattan in March of 2020, Michael Peckins decided to use his time at home to work on improving his brother Matthew’s life. Matthew is 43 years old and has cerebral palsy, which causes spasticity in his legs.

When Michael and Matthew’s mother found the Chill-Out Chair online, Michael knew it was something Matthew needed. Once Matthew started using it, it was clear the chair has a positive impact on him and helps him and his body relax.

“It keeps him comfortable, reduces spasticity, and fights his body to bend so it sits comfortably,”  Michael said. “I never realized he never had a comfortable chair. He maybe had never been comfortable before.”

Michael said the Roll’er Chill-Out Chair also gives Matthew flexibility in ways they weren’t expecting, such as being able to sit comfortably throughout the house.

“I bring the chair into our mother’s room so they can spend time together,” Michael said. “Thanks to this chair he isn’t laying in his room by himself anymore or spending so much time in his wheelchair, which isn’t very comfortable.”

When Michael realized how well the Chill-Out Chair was working for Matthew, he decided to order him a second one so he could have one at each parent’s house.

“It improves his quality of life in such a way that I couldn’t have my brother not in this chair for half the week,” Michael said. “We were going to wait until we got the second chair to take it to my dad’s, but I actually take it on a dolly and pull it down the street from one house to the other.”

Matthew spends his time in both of his parents’ apartments, along with a few visits a week at Michael’s apartment. Since Michael lives in the same building as his mother, when he brings Matthew to his home, he uses the Chill-Out Chair to take Matthew from one apartment to the next.

According to Michael, Matthew never naps during the day. One day Matthew was at Michael’s house while Michael was putting up wallpaper, and Michael brought Matthew and his Chill-Out Chair into the hallway so he could watch Michael work.

“I looked over at him, and his eyes were half-closed, it looked like he was half-asleep. I didn’t say anything, and when I looked back two minutes later, he was out cold and looked as peaceful as could be,” Michael said.

Matthew slept for about three minutes, and when he woke up and saw Michael, he smiled.

“No one, not me, our parents, or his home care nurses have seen him fall asleep in the daytime, ever,” Michael said. “So clearly he’s comfortable in that chair.”

Since Matthew received his Chill-Out Chair three months ago, he has used it every day, and he smiles every time he goes in it.

“I really feel you have made a great product, I didn’t realize what we were missing until we had this and now his life is improved in dozens of ways we never expected,” Michael said. “This chair is a safe haven for my brother.”