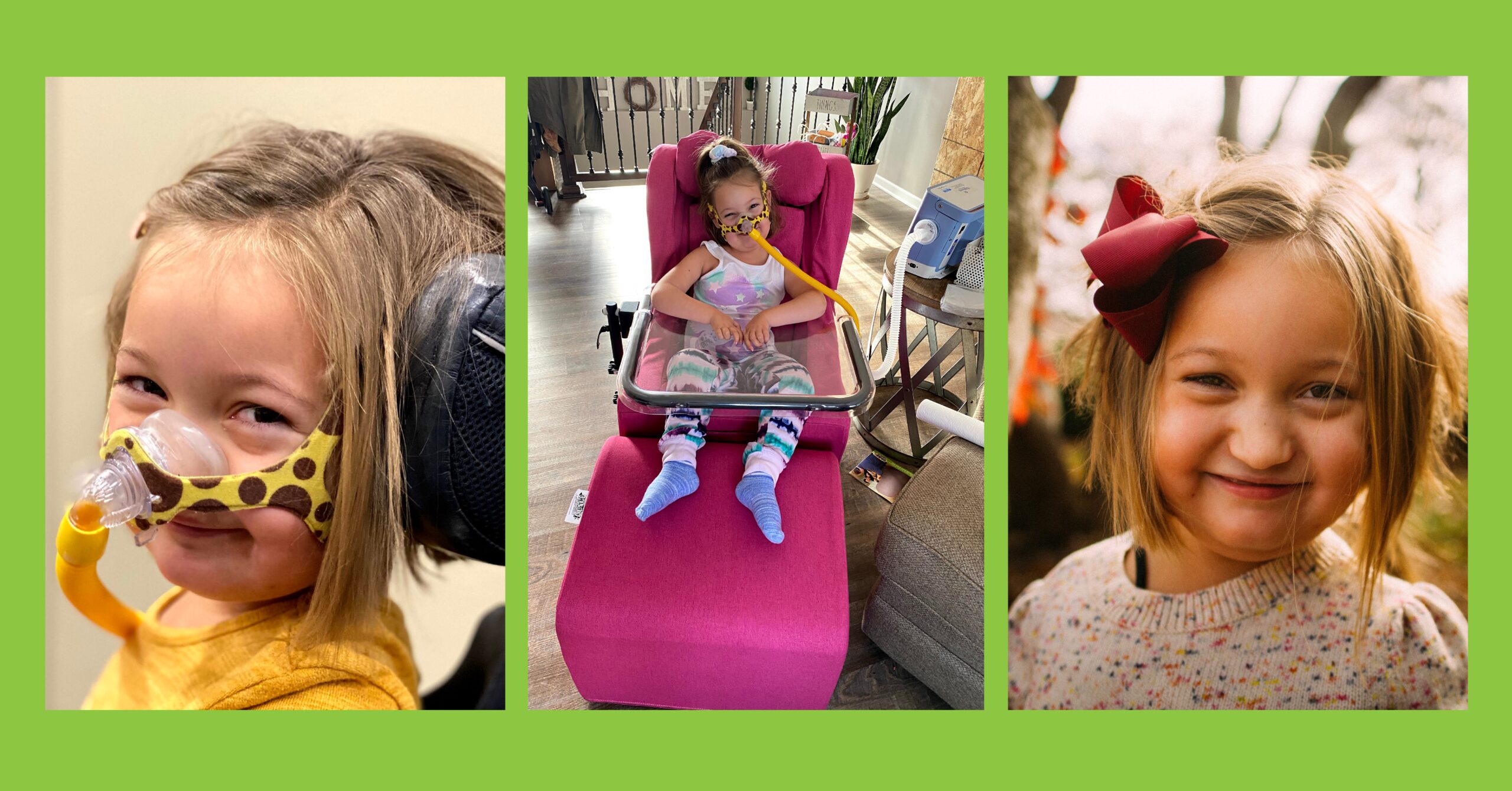 Sasha describes her seven-year-old daughter Sutton as a very determined and strong-willed girl who loves to sing and dance.

“She’ll tell you she wants to go on an adventure all the time,” Sasha said. “She just wants to keep up with her peers and try new things.”

Sutton has a form of neuropathy called spinal muscular atrophy with respiratory distress (SMARD1). SMARD1 has weakened Sutton’s muscle strength, so she has limited movement in her arms and hands, and no movement in her legs. Because it has also affected her breathing, she’s on a ventilator via mask full-time.

Sutton recently received her Roll’er Chill-Out Chair which not only gives her the support she needs when she sits but also benefits her in other ways, the biggest one being socially.

“She’s able to better interact with her siblings because when she’s in the Chill-Out Chair she’s down lower than her wheelchair allows, which makes it easier for her to play with them,” Sasha said.

Sasha learned about Chill-Out Chairs when she was researching supportive seating options for Sutton, and from a foundation that was helping them raise money for an elevator in their home. The other family the foundation was raising money for was getting a Chill-Out Chair for their son.

Since they don’t have an elevator in their home yet, Sasha said the Chill-Out Chair gives Sutton a place to sit on both floors of their home.

“It’s pretty lightweight, so we’re able to carry it up and down the stairs,” Sasha said.

Sasha loves that the Chill-Out Chair is supportive, but it doesn’t look like special needs equipment.

“This is our first piece of equipment that doesn’t look like a monstrosity,” Sasha said. “It makes her feel like another kid.”

Sasha recommends the Chill-Out Chair for its looks, the comfort Sutton gets from it, as well as all the different uses they get out of the chair, such as while Sutton is watching TV.

“It allows her to pull up next to the couch and feel like she’s lounging with the rest of us,” Sasha said. “It gives her another place to be comfortable and have a little stretch but still have enough support.”

Sasha said they even brought the Chill-Out Chair with them on a recent visit to family.

“She was able to sit in that instead of her wheelchair which was nice,” Sasha said. “And because it’s on wheels we were able to push her around.”